The secret of the seal, under the trees...

One of the reasons that I love the work I do is that the natural world offers an unending capacity for surprise. Even in this corner of the world that is seemingly more pavement than greenery there are remarkable organisms - hanging on by a thread.  On a job site I recently came across a plant I had never seen in the field before: Golden Seal. 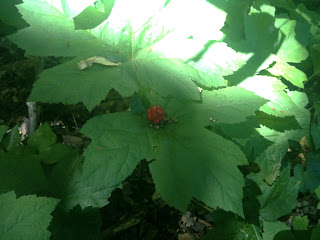 I guess I shouldn't be surprised that I have not seen this before, as it has apparently been over-harvested for it's purported value in folk medicine. This little stand of plants was growing quite happily on private land - where there is an owner that is committed to restoring this area and removing invasive species.

Locally, the Plants of Concern project has Golden Seal listed on it's roster of plants that are being monitored.  One of the keys to future preservation of such plants is secrecy. It's not far-fetched to imagine that if this plant were on public land it would be gone by now. As it is today, on private property, under the care of a concerned homeowner - these plants have a fighting chance.

It's worth noting also that these plants were seen in an area that had a fair number of invasive plants in their vicinity. At the first glance, it was a landscape that wouldn't normally appear to hold such surprises. As always, tread carefully and keep those eyes open!