It’s a hell of a thing when we live in a world where we have to erect fences to keep the vegetables safe from....I'm not sure who.This was among my initial thoughts as I pulled up to the urban garden that had been built on the site that used to be occupied by the Robert Taylor Homes. I toured the site along with my grad school classmates, and I’d been looking forward to the visit as I’ve also occasionally taught a lot of the concepts of urban gardening to my students.  The reasons that many (myself included, from time to time) have advocated for urban farming – gardening, really – are numerous. You have possibly heard of many of them. They’ll include:

I’d arrived with a hopeful and positive outlook on what I was going to see and learn, but when I drove away my thoughts were far more mixed.

The gardens we toured are managed by the Chicago Botanic Gardens, as part of their Windy City Harvest program.  This particular site – it should be pointed out – is not open to just anyone who walks in.  The raised bed gardens are tended by those who have completed their training program first. Afterwards, these graduates are then allocated space to grow crops for a two year period.  Many use this facility as a sort of business incubator, providing food and floral crops for farmers markets and the like. I pray that I’m wrong, but my sense was that the people tending the beds that day were from everywhere but the adjacent neighborhoods.

This property was once the site of the Robert Taylor Homes, and is now, according to our hosts, leased for 100 years by a developer. These gardens were safe for anther few years, but the issue of property ownership is one of the uncomfortable realities of many community gardens. They'll often exist only as long as there is a benevolent land owner that lets them scratch around the soil until they can sort out what to do with the site.

The way these gardens were constructed was a model of impermanence. All the planting beds were raised, built over the existing grade – the remnants of demolished housing towers. The hoop houses, the requisite compost bins, and tool shed could all be dismantled, hauled off, or bulldozed in a day by a competent contractor. The garden operation will be sustainable until someone wants build a shopping center,or townhouses, and then that will be that. One can only hope the development will have a grocery store where people can buy some food.

On of the admirable goals of this operation was the plan to deliver crops to those in the city who get assistance to buy food.  Residents could obtain vouchers to exchange for produce sold at local farmers markets. We were told that, unfortunately, this program was under-utilized for what sounded like a number of bureaucratic structural reasons. Also, it seemed that simply getting to a farmers market isn’t as easy as one might hope.  Inspired, I asked why people couldn’t simply exchange vouchers for produce directly from that facility.  I later realized that much of what was grown there was said to be delivered and sold at farmers markets in tonier locales such as Hyde Park, Rogers Park, and so on.

During the course of our visit there was an implication that there was tension between the gardens and the neighbors. Hard to imagine why there would be resentment when a bunch of high minded outsiders come into town and get to garden in lovely plots (built for them for free) all of it protected by a substantial chain link fence. During the tour, I picked up that one of the garden businesses was named “garden anarchy” – or such like. Yeah! Stick it to the man! How easy it is to proclaim anarchism (over craft beer, I’m betting) when the whole shebang is subsidized by the largesse of a developer and wealthy donors.  Heaven forbid that a real anarchist should take a pair of bolt cutters to that fence.

Okay, so maybe it’s me who has the problem.  And, okay, maybe all of our goals (see Part I) aren’t exactly being met – but isn’t that still better than doing nothing?  How can I complain about a garden rising from the ashes of a failed housing project? Aren't the people working there trying to make a difference?  Am I a little jealous that I’m not a self-proclaimed garden anarchist?

I recall once reading about how urban gardens facilitate gentrification. When I’ve mentioned this to colleagues I’ve gotten either hostile or muddled responses.  However, when I see stories like this – this connection may not be all that imaginary. I can understand why local residents might view the sight of hipsters tending beds of kale as a harbinger of hard times ahead.


Taking all of these things together, I’m just not sure what the purpose of these urban gardens is. I don’t think they are the most effective long term solution to the very real problems of food and hunger in the world.  Perhaps they are best at getting people out, in the sun, and talking to one another. During our tour, everyone seemed happy to be there. The summer vegetables were fat and gleaming. Freshly harvested carrots, too stunted for sale, were washed and shared among the visitors. A Red-tailed hawk, swooped and perched for his audience on a nearby power pole. On such a lovely day, inside the fence, the optimism was real, and the gardens were lovely.


A couple of weeks back we all journeyed out to northern California, where among other things we took in the mighty Pacific and mighty trees - specifically the coast redwood (Sequoia sempervirens). Such sights drastically confounded my normal sense of scale, and after a little while on the trail I simply abandoned the idea of trying to photograph these trees - and zeroed in on the scenery that was a little closer: 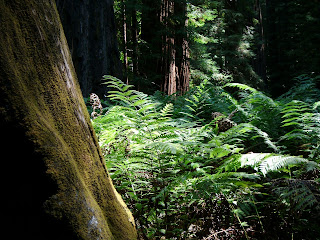 Thanks to a kind tip from the folks at the hardware store in Mendocino, we hit the road to hike among old growth trees that were in the same general size range as the Hyperion tree - recently tweeted by the Biodiversity Heritage Library:


It's difficult not to get swept up in the wonder of which tree (was, until 2010) considered the tallest tree on Earth.  However, these individual trees are not marked - and really, after about a mile or so in we lost count of the trees that may have been the local champ, as the trees seemed to just get bigger and bigger.

Upon returning home I began teaching a plant identification class.  I suppose I look forward to this more than my new students - some of whom are wading for the first time into the world of plant names.  I recognize the challenge of this, and so over the past couple weeks we have started with the basics.  I believe that everyone has some intuitive knowledge of naming plants, a knowledge that begins at childhood and accumulates in almost a subconscious way.  I think that we often underestimate this lifelong understanding - but having access to these personal memories of the plants of our past is a great foundation for any future explorations in botanic nomenclature.

All of this plant naming business came to a head today when I read this touching and funny tree-related essay about a recent memorial celebrating the life of the greatly missed writer Alexander Cockburn: 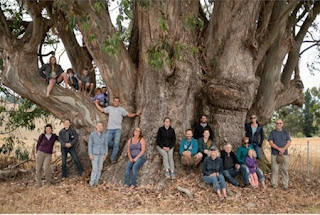 Scientists have verified that this enormous Blue gum tree (Eucalyptus globulus) - near Cockburn's final resting place - has world-record circumference and will be known henceforth as the Alexander Cockburn Tree!  It's gratifying to know that to many, this particular (Very Big) tree will now occupy a place in their hearts and memories that goes well beyond a scientific name in a textbook or a random tree in a meadow.