This tweet posted by DePaul professor Liam Heneghan stirred up some old memories:

When I was a little kid, maybe 5-7 years old, I received a copy of the book The Tale of Squirrel Nutkin as a gift. The book was also accompanied by a little toy plastic squirrel, that was covered with fake fuzz to make it seem more realistic. I've read a lot of books, and forgotten many of them. However, Liam's tweet reminded me of how unsettling the owl character was to me in that story.

It must be so, because after a half a century I can still recall (paraphrasing the character Quint in Jaws) the "cold dead eyes" of Old Brown. This owl had the all-black eyes that many species possess, and I think Beatrix Potter did well to cast and illustrate the malevolent target of Nutkin's teasing. Ultimately, the teasing goes too far, and Old Brown has had quite enough. He pins Nutkin on his back, threatening to open him up the way a fisherman would gut a bluegill.  Old Brown gazes at Nutkin with a sad, almost benevolent gaze: 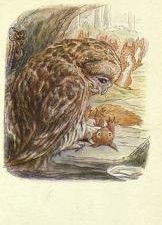 This is going to hurt me more than it is you....

Anyway, Nutkin survives this encounter and lives to see another day, less the better part of his tail. My exchange with Liam got me thinking about this book, and the message it sends to a young reader: Listen junior, don't jack around with authority too much, or there will be severe consequences.... Nutkin - now with only half a tail - is now clearly marked amongst his squirrel peers. But how? As a bad seed, battle scarred, or as merely unlucky? Don't you secretly wonder if he remained a smart ass?

For the life of me, I cannot recall who gave me this gift when I was a boy. I think it may have been from one of our neighbors, but I can't be sure. In hindsight, it's tempting to wonder if I was being sent a message: Be a good boy David, or the man will cut you, and scar you!  And you have to admit, there is some truth in that message. Life, and nature has boundaries. Liam is currently working on a book about kid's books, and our folklore is full of examples of what can befall one when those boundaries are crossed - or if those silly kids wander too deep into the forest.

Be careful out there. Stay on the trail, and don't mess around with the owls!

Posted by Dave Coulter at 5:34 PM No comments:

Posted by Dave Coulter at 8:35 AM No comments: 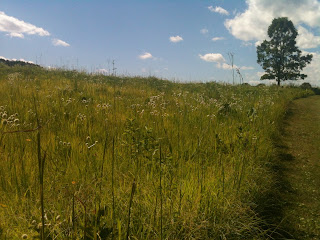